My life has changed. 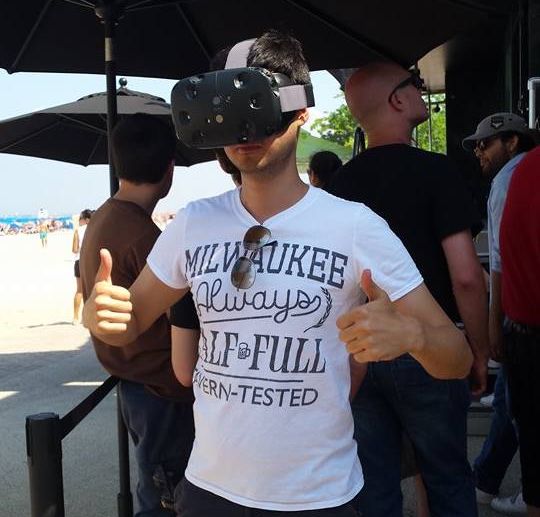 I tried VR when I was very young, a bit less than 20 years ago I think, the headset was enormous and heavy, the screen was tiny, the controller was shitty, I got a huge headache after playing for a minute or two. The game was Doom I think. Can't remember much about it anyway.

So yeah I wasn't expecting much, even though people were getting really excited.

VR (or Virtual Reality) is the shit right now. Oculus Rift, the first one bootstrapped by a kickstarter campaign, got bought by Facebook last year. Then other VR systems were announced, Project Morpheus (Sony) and HTC Vive (HTC and Steam), and Hololens (Microsoft). Microsoft Hololens not really being VR but AR (Augmented Reality) because you can see the room where you are, whereas the others completely shut down the reality around you and give you a totally immersed kind of experience.

If you're reading this I guess you probably already know most of that and are just interested by my impressions on the HTC Vive.

Well it was f'ing awesome.

They put me in a small room, bedroom type of room, asked me to stand over a white cross on the floor and placed the headset on my head. It was not that heavy, but not that light as well and I got afraid to get a sore neck after playing for too long (which I didn't get after the 25min demo). They then placed a headphone around my ears (which is not included in the headset, contrarily to the Rift) and the world around me was now gone.

I was at the center of a white room, in front of a "Push to play" panel, surrounded by frames presenting the different demos.

I heard the guy in the room who was taking care of me, and reality came back, he was talking to me through a microphone connected to my headphones. He told me "I'm gonna hand you two controllers". I saw two controllers flying toward me, and I grabbed them, they were not exactly the same as the ones I was seeing and I could feel the hands of the guy handing them over to me which were not in my new reality. Also I didn't have any feet. It didn't bug me so much, I still felt like I was in another real world. It felt crazy, totally unreal. And this was only the introduction room. The controllers were moving exactly like I was moving them in my hands, I pressed a button and a ballon popped from my controller, I pushed it and it went away. The physics was exact. I blew up another one, with a different color (I could use one of the controller as a color wheel) and tried to move it around with my two controllers, it worked. "Wow" I said outloud. My skepticism went away in a flash, I was sur-excited, this was real, they didn't fuck up VR, it really worked.

He explained to me that I would see the wall if I walked too close to one of them. So I tried to walk straight until I reached something. A wall appeared in my vision, like a real wall, except it was transparent. Like a virtual wall in my now "real" world. I tried to reach for the wall, My right hand holding the controller went a bit further than the virtual wall and hit the real wall.

The screen went black, then I reappered underwater, surrounded by fish. I tried to touch them and only got them to swim away from me. I looked up, I could see the sun reflecting at me from above the ocean. I turned and realized I was on an wreck, on its deck. I walked a bit around, still scared of hitting a real life wall. Then I saw some big fish that I tried to catch but they never went close enough to me. And then a huge whale came, and I got a thrill. I heard it before I saw it, and I knew where it was because of where the sound was coming from. I turned, the whale came and stood right next to the boat and kept doing that huge noise while looking at me.

Trippy, wow, what was going to happen?

I was now in a kitchen, I had more freedom, this time I really felt like I could go anywhere around me. I looked at my controller, they were hands! Like huge white hands, mickey-mouse kind of hands. That was awesome, I started rotating my controllers and pressing the triggers and I felt like they were my own hands! They were moving exactly like I wanted them to move. I grabbed a bottle of wine and threw it in front of me, it broke against a wall. I grabbed a knife and tried to cut a tomato, the knife broke in pieces cutting the fruit in half on the way. I closed a microwave on my right and pressed on one of its button, it turned on and after a while emitted a beep. I could do anything, I had total freedom, I was in a real kitchen that didn't look real. But I wasn't bugged by the graphics, I felt like if played on a normal screen I would have thought "the graphics are meh", but presented like that, like a totally interactive experience, I felt like everything was real. 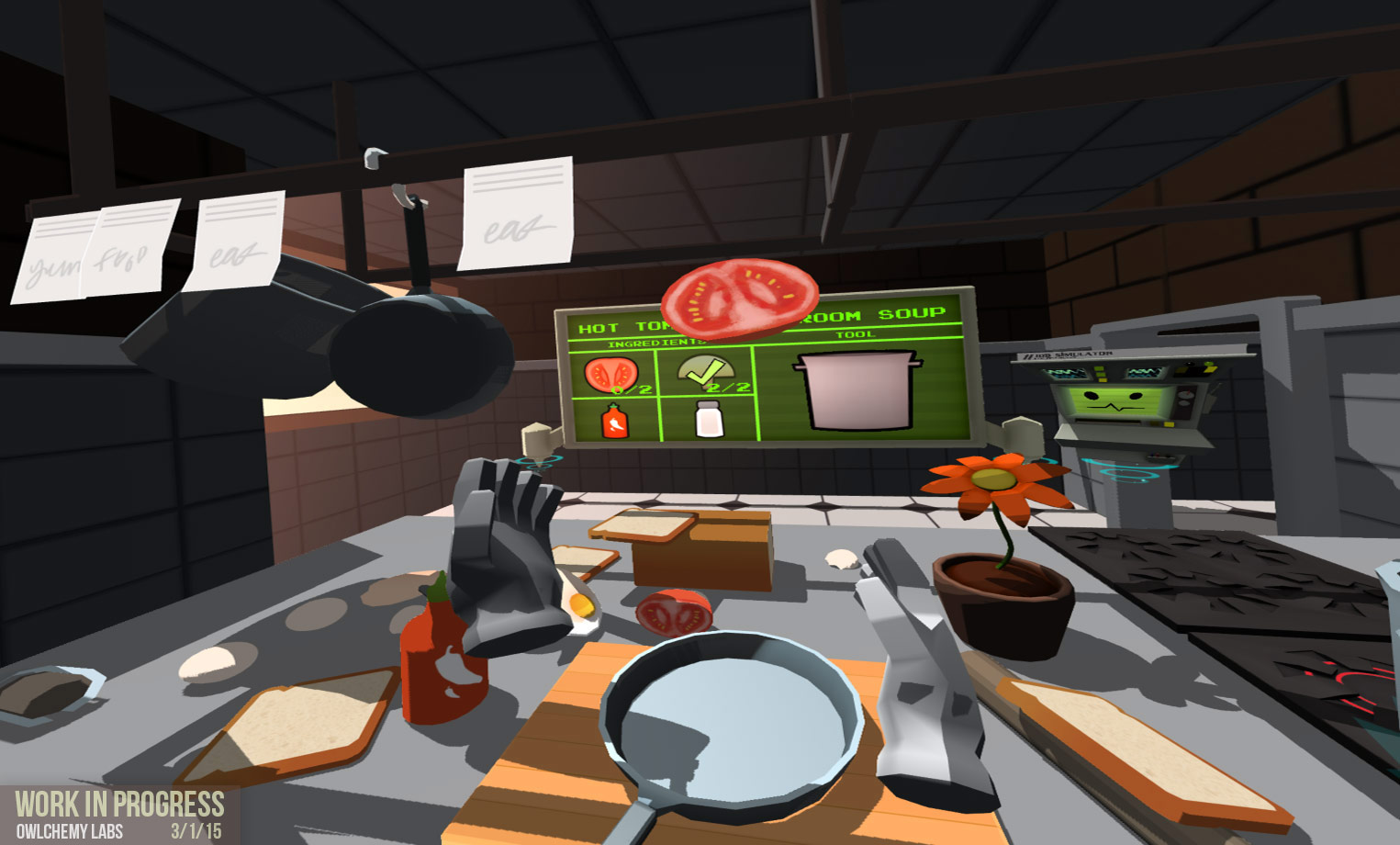 There was a recipe on the wall on my left that read: 2 tomatoes, 2 mushrooms, red sauce and salt. I picked up two tomatoes and dropped them in a pot, looked around for the mushrooms, saw something weird on the table and stopped. How could I know if that was the mushroom. And then it came to me, why didn't I just grab it? So I grabbed it like I grabbed everything else in this kitchen, by moving my hand to it and pressing the right trigger like I would press the object and it was now in my hand. I looked at the object from several angles, moving it around with my fake hands, and saw that it was a mushroom. Hop, in the pot! :)

What about the 2nd mushroom? I took a look in the fridge and found my 2nd mushroom. In the pot as well! The sauce? Right on the counter. Pressed a bit on it while it was dropping in the pot, so it went faster (but did it do something? I don't know). Finally grabbed the salt and shook it over the pot like I would have shaken a real salt cellar. It worked...

And then I got a bit sad, thinking at the other VR headsets that don't allow you to move around (with your own feet) and control things with your (own) hands.

I was then in a new black room. I was instructed to look at my controllers, the right one would be my brush, the left one would be my settings. I pressed on the left one and a plate full of color came out, like an hologram, I clicked on one of them with my right controller to pick up a color and I could now paint in the space in front of me, anywhere. It felt totally different, like I was creating a structure in 3D. I painted a box in space, and turned around it, inspecting it from all angles. I thought a fire would be nice in it, changed brushed and placed one there. Then I added rotating rainbows around the edges of my cube. It was beautiful. I placed my head inside of my art, I went around it placing these lines of colors everywhere. This was truly beautiful.

My mind got very busy thinking about my artists friend and what they could do with that, all the possibilities... and then my world disappeared.

The last demo was a "real" game this time: Portal. I was instructed to play around in a room, opening one of the drawer I discovered a multitude of small box offices in an open space, filled with small black sticks people working. They then realized I was looking at them and all went batshit crazy. It was like that scene in Men in Black when Will Smith look at that little planet in their HQ. It was fascinating, it was so real (I know I say that word a lot).

By the way I think this was all done in Source Engine 2. I don't know how good were the graphics though, I just know everything looked completely real to me.

I then opened a switch an a robot entered the room. A crazy robot, it all looked pretty scary like I could get hit for real, I just stepped back and then the robot got stopped by a robotic arm and fell to the ground... I was then handled the task of repairing it, and like in the movies, I dismantled the inners of the robot and could interact with each of its parts, suspended in the air like no gravity with affecting them... I don't want to talk too much about this demo because it's worth being surprised by what happens :)

And then I was done. I removed the headset and came back to life. I couldn't believed what just happened.

I managed to get into the room while someone else was taking the demo, you could see on the screen what they were seeing but I was not allowed to film. There was a sensor (sensors?) in the room as well to detect the movement, the demonstrator told me that being in front of it could disturb the movement detection.

I don't think I have much else to say apart the fact that I'm gonna buy that when it gets out. This is the future.