If you like languages and you're making an effort to follow what's new and cool on internet, then you've certainly heard of Duolingo or even Memrise.

The first one was invented by Luis von Ahn to confront the issue of translating the web. He states that with 1 million users, Duolingo could help translate all of the english content of wikipedia into spanish in 80 hours only. It's still a beta at the moment, a lot are changing every month and you need an invite to access it (by the way leave me your mail in the comments and I'll send you an invite).

The second one works on the "flashcard" method. You basically have to guess the meaning of a word repeatedly until you get it. This one is available for everyone.

Both are free. Both are amazingly well done. If I could differentiate them right away, I would say that Duolingo seems to be more sophisticated, built like a real method, while Memrise seems to be driven by its community and more oriented to sharpen one's vocabulary. It also has an incredible list of languages compared to Duolingo (chinese, Hindi, Russian...).

Since I've seen this talk about Duolingo, I've been patiently waiting for my invitation to the beta. I received it a few month ago and decided to give it a serious try, first with spanish, because fuck german you know. And more recently with german, because fuck people who don't change their mind you know.

I quickly disabled the "microphone" part of the product and advised my friends to do the same. Why? Because it slows you down, it's unusable if you have a crappy mic or if you're at the library, and overall, it's not a good approach to learn pronunciation.

I really think that it's better to watch series and repeat after some of their lines (usually the one I find difficult). Even when on Duolingo, I repeat the sentences they say. Also I recommend spending time in the country, finding language partners in your own country etc...

I also quickly ditched the translation part of the product, which was the main attraction of the project at first, and don't regret doing so. The few I've did were obviously articles from wikipedia, and were way too technical to learn anything from them, and to actually be able to translate them correctly. I might go back to this part when I'll finish all the lessons available, but for now I don't think it's a viable way of building up vocabulary. 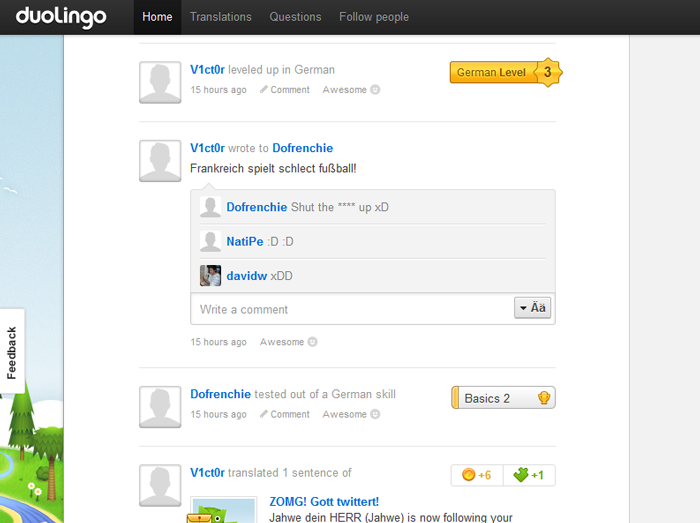 If Duolingo does something correctly, it's the gamification of learning. I've dreamed of that since I'm a kid. I've never understood why school wasn't built from a "videogame" point of view.

When I go on Duolingo, I have this "stream" which tells me who did what. I can see that my friends gained 157 points today. I can see how much I did this week. Hell, I even received a mail telling me that my friend passed me. 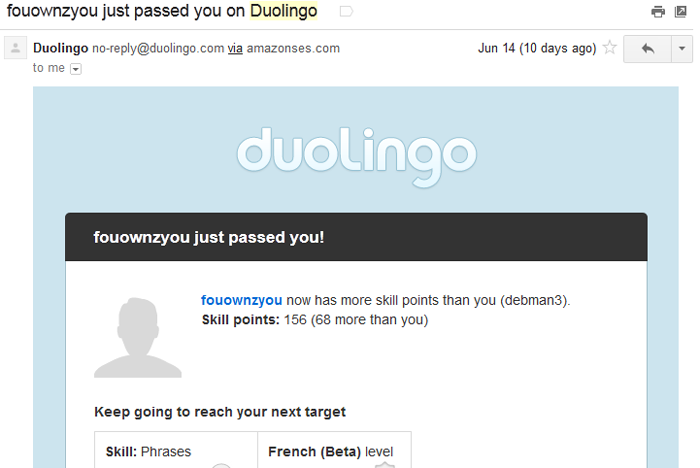 I have to admit that I actually gave up on Duolingo pretty early on, but came back just to beat my friends to it. I have this competition spirit and Duolingo works well on me.

(I just recalled the same thing happened to me when I was a kid, doing websites after school until I got fed up. But then all my friends started doing it, and did great things, got me back in the race pretty quickly just to prove them who was the best kid (no I'm not an arrogant one))

The lessons are great. DuoLingo is built like a real "method" to learn languages. You have this tree of "topics" that you have to "unlock" to progress and be able to do the next ones. There is a real work behind that and the fact that it's all free is a huge deal.

The lesson system helps you to learn new words while making sure you remember the older ones. The UI is great and you can do everything from the keyboard without having to use the mouse.

The key idea is repetition. And This is where Memrise try to emulate. 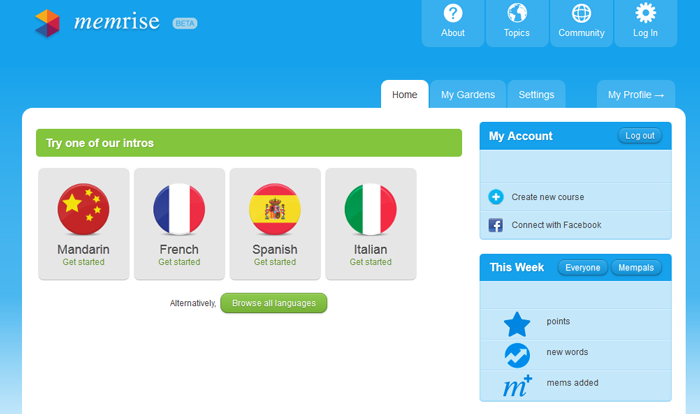 Memrise is beautiful, well thought, free. These are the first words which came to my mind the first time I scrolled through the beast.

Repetition and Gamification are two things that Memrise and Duolingo share. That's for sure.

But before talking about how Memrise do it, I have to tell you the big downside of it, there is no "lessons". At first I didn't care, because I'm a huge believer that the first big and long thing you should do when trying to enter the world of a new language, is to quickly learn a huge list of words. It doesn't matter if you don't know grammar, the words will help you say something, and understand most of the things.

Grammar, pronunciation etc.. comes after when you want to play with those words.

Anyway, to each his own, Memrise gives you this plantation system where each word you chose to learn is a flower you can plant. Each time it asks you the translation of a word, you water it. After several days of watering you can harvest it. It's simple and neat.

Now the bad thing is, what words should you learn? There is no way to quickly skip something you already know like in Duolingo. Actually, you have to choose the list of words you want to learn in a list of lists.

This is were the community is huge, and similar to what Anki has: the lists are user created. So you can even make your own list, and if a lot of users subscribe to it then it becomes famous.

Also a big downside of this : you have no context around the words you're trying to memorize 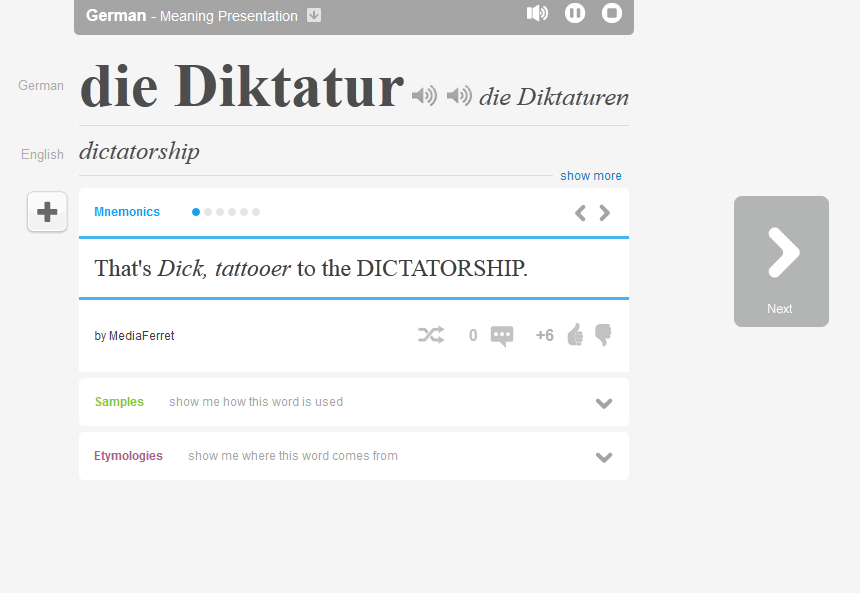 Finally, I also find the website to be very slow, which is a downside if you consider that Memrise was built to quickly learn a list of words (the flashcard idea).

The gamification is a good idea, but Duolingo does it better. I'm still keeping Memrise for further vocabulary improvement and also because I believe it can improve what it's doing wrong.

So if you want to learn german, french or spanish. Go for Duolingo, disable the microphone in the settings, and invite your friends to compete with you.

If you want to learn chinese, russian, korean. Hell, even medical terms and musical notes. Try Memrise. It's free anyway and you will still learn something while trying it out.